The Fairhill Campus has served the Greater Cleveland community for over 78 years. In 1837 the Medical Board of Marine Hospitals designated Cleveland as the site of a hospital to benefit sick seamen, boatmen, and other navigators. 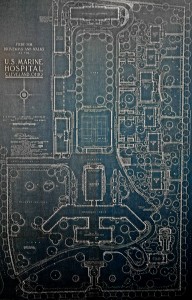 A blueprint from the original Marine Hospital.

By 1916, with a capacity of just 85 beds, the hospital’s original location was deemed too small, and Congress took steps toward relocating the hospital to Fairhill.

The land was originally cleared by Otto I. Leisy, president of Cleveland’s Leisy Brewing Company, who built a three story brick mansion on this site in 1905 that included a two story woodframe stable. These stables are still in use at Fairhill and are available for community rentals. Please see Event Rentals for details.